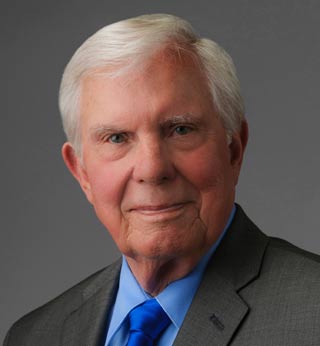 A graduate of Stanford University, Mr. Foote received a B.S. in History and Political Science in 1956, followed by his Juris Doctorate from Stanford Law School. In 1959, Following active duty in the Army Reserve, Mr. Foote was employed in the San Francisco office of the California Corporations Commission.

He relocated to El Centro, in Imperial County, California in 1961, where he became a Deputy District Attorney. At that time, the Imperial County District Attorney served both as the chief criminal prosecutor and the civil legal advisor to all County official, including not only the Board of Supervisors, but also all other elected and appointed County officials as well as all school districts. Mr. Foote became the sole deputy performing the District Attorney’s civil duties upon his arrival. Thereafter, in 1963, continuing his role as the County’s chief civil legal advisor, he was appointed as Imperial County’s first County Counsel, (California’s youngest County Counsel at the time).

In 1965, Mr. Foote joined the Firm with which he continues his full-time practice as managing partner. During his legal career, he has practiced before most courts in Southern California as well as administrative and regulatory agencies, both State and Federal. His practice involves a wide variety of subjects, including personal injury and property damage defense, complex energy, healthcare, construction and other civil litigation and transactional matters. Presently, Mr. Foote continues to “first chair” bench and jury trials and to supervise the Firm’s associate attorneys. He has tried more than thirty civil jury cases to verdicts and was part of a team that successfully prosecuted a construction defect claim to one of the largest jury awards ($25,000,000 – Imperial Valley Resource Recovery v NEPCO, et al) in Imperial County.

Mr. Foote’s clients have included, the Imperial Irrigation District, the City of Imperial and numerous special purpose local public agencies. He is currently General Counsel for Pioneers Memorial Healthcare District. During his time in Imperial County, Mr. Foote has served on numerous boards of directors of charitable organizations, including the Red Cross and United Way. He is a member and past president of the Rotary Club of El Centro and served as a member of the board of directors of the El Centro Education Foundation. Mr. Foote was also a founding member of the Imperial Valley Economic Development Corporation and served as board chair for many years.

While he grew up in the San Francisco Bay Area, Mr. Foote has lived in Imperial County since 1961. He is a married father of four children and enjoys playing and listening to music, reading and spending time with family and friends.